About Italy and the Correlation between SMS and Twitter

I have had some interesting discussions about the use of social media in Italy. Of course Italians are very social people – they love to communicare and exchange personal information. This is not just a stereotype. Italians like to hang out with each other and if they can’t do that in person, social media comes in handy. 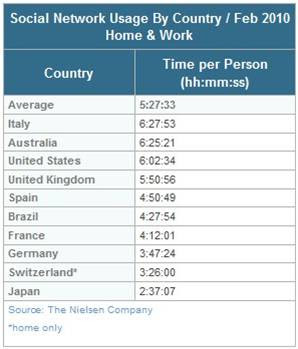 According to a March 2010 report by Nielsen, Italians are the world champions in spending time on social media - on average, every Italian has done so for 6 and half hours per month. Facebook has effectively become the virtual piazza, where Italians go to meet with each other and sip on a virtual amaretto.

However, when looking at Twitter, Italy is punching in a much lower weight category. According to the research by Sosomos, less than 0.5% of tweets are being contributed by Italians. Twitter is clearly not particularly popular in Italy which might come as a surprise considering the strength of Facebook.

Originally I thought this was because of the forced brevity of Twitter messages. After all, you can’t speak with your hands on Twitter and, really, how much emozione can you fit into 140 characters? But that argument fails given the massive popularity of SMS messaging with a 160-character limit which Italians use heavily. Italians SMS almost as much as they talk on their mobile phones, which seems to be all the time. (I found a Nielsen report from 2008 that says that only the Russians and Swiss text more than the Italiani).

So maybe it is the apparent lack of personal communication on Twitter. After all, SMS messages are one to one while Twitter posts are one to many. Facebook relationships are bi-lateral while Twitter followers are unilateral. I follow Eric Schmidt but he doesn’t follow me (by the way, why not, @ericschmidt?). The public nature of Twitter posts might seem to be more akin to public speaking than to a dinner-table discussion of Facebook conversations. After all, the heaviest users of Twitter are Americans who love public speaking. The Italians are more into looking good, making a bella figura, over being popular. 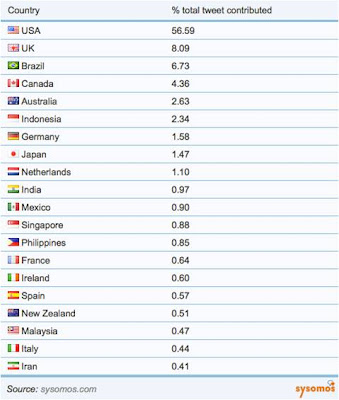 I am speculating, of course, and the real reasons may be very different. But I find it fascinating that there are such differences in communication between countries and I also find it notable that there appears to be no correlation between the popularity of SMS and Twitter.
Posted by Lubor Ptacek at 5:39 PM