A lot has been written about social media and so I am not going to talk about its end-user appeal or benefits. Instead, I’d like to discuss the value of social media for the operator. Advertising is of course the first thing that comes to mind and that’s behind Facebook’s agenda. But there is another benefit that so far has not been making the headlines: metadata.

Metadata is essential for any content. Without good metadata, content is difficult to find and impossible to process. But good metadata is very difficult to get. Traditionally, the users were expected to add it at the time of content creation and throughout the processing. But users are notoriously unmotivated to do so and they won’t. Automatic approaches through content analytics are promising but still nascent (see my article The Problems Waiting to Be Solved). Yet here comes a 3rd way to create metadata – social media.

Just think about what’s happening on Facebook. Millions of users are socially interacting. They are telling each other their opinions about what they like and don’t like, what they do, what they need. This is the online version of an Italian piazza or an American sports bar on a football night. And they do it of their own accord, without corporate policies, and without having to adhere to any taxonomy. Mining these interactions is relatively easy and the result is information about people, processes, and content. And that’s how we define metadata.

Unfortunately, Facebook owns their metadata and they will be selling it to advertisers a bit at a time. And that really worries Google. If you want to read a good book or find a good store, you can either search for it or you can get a recommendation. You can either trust some search algorithm that relies on keyword prominence and frequency of links or you can trust your friends whom you know and share common interests and values with. That’s why the metadata generated from social media is more valuable than any search index and, as a result, ads based on social media are much more relevant than the ads based on search. And that’s why Google fears Facebook.

The same applies for private social media deployments on your intranet or web site. The high quality metadata generated by social media in an enterprise is just as valuable. It can be the driver for use cases such as recommendations, expertise location, knowledge discovery or suggestive records filing. Yes, the value of social media lies not only in the user engagement and interactions; it also represents a great source of metadata. And that’s the secret value of social media.
Posted by Lubor Ptacek at 7:40 AM No comments:

Inspired by Alan Pelz-Sharpe's family tree for EMC's content management family, I couldn't resist to create my own view. The list of acquired is probably not complete but the key acquisitions are there: 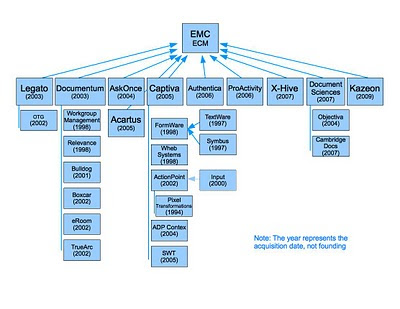 My view is not meant to better Alan's; it simply provides a different perspective. Alan did a great job on the Open Text's family tree, by the way.

Ping me if you have any further detail to add.
Posted by Lubor Ptacek at 6:17 PM No comments:

Apple has been quietly taking over the Internet. Just when we thought that nothing could stop Google, here comes Apple with a very credible strategy to become the Microsoft of the 2.0 era – at least in the consumer space. Apple has cleverly combined the appeal of their popular devices with the one thing people will continue to spend money on – content. As more and more things that can be digital are becoming digital, content is one valuable commodity. Apple or perhaps Steve Jobs understands this and continues coming up with ideas about what to make you want to spend your money on: music, movies, games, applications and now even e-books.

So, what’s next for Apple? What other types of content can Steve Jobs realistically make us want to pay for? Well, there are multiple content types that have been digitized without an apparent monetization model: newspapers, magazines, radio, maps, classified ads, etc. These are the candidates for Apple’s next move. However, Apple requires a couple of ingredients for the model to be successful: the content has to be valuable, protected by copyrights and threatened by piracy.

To monetize copyrighted digital content that is too easy to copy illegally, Apple has built a complete vertical stack based on a closed system. You want the cool device and you need content to use it. The content comes from Apple’s own iTunes store, it is managed by Apple’s iTunes application, and it is delivered in formats controlled by Apple (and not by Adobe). This is the only effective way to fight content piracy.

Many of the not yet monetized content types fit the bill. The newspapers and magazines have been fighting commoditization of their content for years with no success. The radio industry has been also in a continued decline, although the temporary success of Sirius radio suggests that people are willing to pay for good quality streamed content. And yet, the world will hardly become a place with no news, no magazine articles and no radio.

We can expect that as more newspapers, magazines, and radio stations go bust, the remaining, strongest content providers will accumulate enough negotiation power to change the rules. They will likely embrace the closed vertical stack and find a way to monetize their content in the same way Hollywood did (or was forced to do). In other words, Apple is likely to team up with outfits such as Bloomberg, Reuters, Associated Press, Newswire, Newscorp, Turner, and others to start selling their content – likely repackaged, personalized and with a dose of social interactions. High quality, personalized news and editorials delivered to your iPad for a fee - and you will pay it and think that it’s awesome.

This will not be the same as when Wall Street Journal tries to charge you for a subscription today. That’s a losing battle – offering the same content package to everyone when all that info is available for free anyway. Reading news on a laptop screen is boring compared to the pre-packaged apps available for the iPad. It will also not be the same as what AOL tried to do by purchasing Time Warner back in 2001 – that was an attempt to control the content creation which is not what Apple does. Apple will resell the content via content apps tailored to their devices and let the creators compete among themselves.

My prediction is that Apple will continue to eat away Google’s attempt to make all the information available to everyone for free (well, for giving up privacy). Apple’s strategy is to lock the information in a vertical stack and charge you for every bit. And news, editorial content, and streamed media are most likely their next move.
Posted by Lubor Ptacek at 1:48 PM No comments:

My latest blog post is a guest contribution on John Mancini’s Digital Landfill blog. John is the president of AIIM which is the leading industry organization for enterprise content management and he has been collecting a series of guest contributions on a variety of topics – all featuring 8 items. And so when I wrote with my blog post on business use for Twitter in business and ended up with 8 use cases, I offered them to John and he accepted my post.

I have been using Twitter for about 18 months, first being just curious, then tentative and eventually I “got it”; or at least some of "it”. I found out that I am more and more using Twitter for work, following the community of similar-minded individuals ranging from industry leaders, analysts, bloggers, gurus, to competitors. I keep finding more and more great applications for the conversations that occur on Twitter, appreciating its open, public nature and brevity. And so I have captured some of the best use cases in my guest article on Digital Landfill:

8 Business Use Cases for Twitter
Posted by Lubor Ptacek at 2:59 PM No comments:

Actually, you should but not always. This rebellious message is aimed at end users but also at any administrator who’s in charge of setting the password requirements for a system. Don’t take me wrong, I am a big fan of security and a defender of privacy. Strong passwords are a good thing – they make it more difficult for someone to guess your password and thus breach your account. Strong passwords require typically a combination of different characters including letters, digits and special characters, minimum length, variation of upper and lower caps, and regular changing.

This is a great idea. That is, until you have to do it for 20-30 different systems. You all have passwords for your work environment – ideally just one since your organization uses single sign-on, right? Yeah, right… And we all have numerous passwords for online services such as banks, brokerages, retirement plans, frequent flyer programs, social networking sites, utilities, retail stores, etc. I like the idea of security provided by strong passwords but how am I supposed to remember them?

Users deal with this in different ways such using the same password for every site or keeping a list of passwords. This, however, introduces much greater security vulnerability than the off-chance that someone will guess your less strong password. You may use specialized encryption software for managing your passwords but that represents a potential single point of major vulnerability and it requires some discipline keeping password lists up to date.

The problem is that many sites and systems require a strong password because of a policy set by an overzealous administrator. Sure, I want to protect really well my bank account in which all my savings could vanish with a single mouse-click (or finger-touch) but the same is not true for my utility bills. There is nothing I can do on the utility’s site except to see and pay my bills and any intruder is welcome to pay it for me. Thus, I don’t need that strong of a password here. Similarly, many shopping sites don’t need a secure password as long as I don’t save my credit card info within said site.

The utility bill could be a privacy issue for some – maybe if I was a politician or a celebrity and I didn’t want the world to see what an energy hog I am. Well, in that case I still have the choice to use a strong password. The bottom line is that administrators should think twice before imposing the need for strong passwords on their users. They should give them the choice. Password strength needs to be adequate to the value of the information it protects and the risk any breach would represent. Weaker – easy to remember - passwords are perfectly appropriate for many applications, especially if they avoid users keeping password lists. The result can be a more secure environment.
Posted by Lubor Ptacek at 12:31 PM No comments: 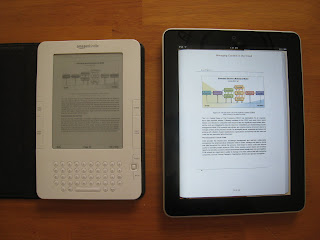 While Kindle is unique with its mobile connectivity sans the cellphone plan, that feature is rather irrelevant whenever there is Wi-Fi available for iPad. Beyond that, it is difficult to see why would anyone want to read their books on a device with a small monochrome screen with a lame keyboard, no touch capabilities and no other use.

iPad provides clearly a more engaging experience with a larger, sharp, color screen, touch capabilities, and lots of other applications available. iPad is of course more expensive and it is also a bit more heavy for "holding the book in one hand". On that front. the iPhone/Touch with a book reader (e.g. Kindle reader) is still unbeatable.

I was lucky to have them both at home over the weekend.
Posted by Lubor Ptacek at 5:10 AM 4 comments: