I am a big fan of Twitter and other social media. I even wrote an article on the 8 Business Use Cases for Twitter a while ago. But I feel that there is now a social media bubble that might burst anytime soon. There are some overinflated expectations that people have on the amount of influence Twitter might have.

Thought leadership in 140 characters
The Twitter limit of 140 characters per message can be a challenge. Yes, it keeps us succinct and it makes the Twitter interactions very agile, but you won’t be able to convey a whole lot of deep thought into a Twitter message. So it’s no surprise that so many tweets include a link. Most of our ideas do require a little more space. You need to complement your Twitter presence with additional communication to share your thoughts. 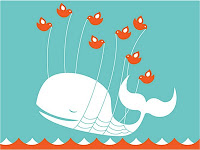 Forget Ashton Kutcher, his 5 million followers are not looking for any thought leadership. They are virtual groupies. But when I see a social media guru with 100,000 followers, I get suspicious about the social aspects of those relationships. With 100,000 followers, there is not much social interaction happening – this person is broadcasting. There is nothing wrong with being able to communicate to 100,000 people but that kind of number usually suggests more breadth than depth of thought. If you are after a LOT of breadth, Ashton is your man!

Ignore the manipulators
Twitter is based on unilateral connections. That means that you are followed by people you don’t know and you don’t have to follow yourself and vice versa. I follow Bill Gates and Eric Schmidt and they are not following me back. And that’s OK. But some people expect reciprocity. They follow you and expect you to follow them. And if you don’t, darn you I will “unfollow” you within 48 hours! In fact, there are automated services that facilitate this kind of follower boosting. Don’t get fooled by it – these thousands of followers are worthless.

If you follow too many people, you are not following anyone
You shouldn’t expect to be able to follow everything the people you follow tweet about. But to stand any realistic chance to keep it social, you have to match your number of people you want to follow with the volume of updates they post. Just do the math. If you follow 3,000 people and each tweets 3 times daily, that’s 9,000 tweets per day that you would need to attempt to keep up with. That’s hardly realistic even if you spend your entire day in Twitter. Try to stay engaged and focused on who you really care about.

Twitter is an exciting tool that can really help you to get your message out, position yourself as a thought leader, and be an influencer. It allows you do things not possible before. But avoid the wrong expectations or you end up either disappointed or discredited.
Posted by Lubor Ptacek at 6:28 PM