Apple seems to be running circles around its competition right now. Just as it looked as if Android might be gaining enough market share to put some pressure on Apple’s, Apple turns one record quarter after another. Sure, Google is gaining market share but the only profit from Android-based phones appears to be made by Google’s advertising business. 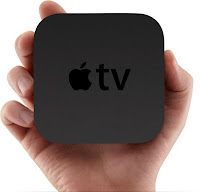 Impressive are not only Apple’s revenue and profits but also the diversification of their portfolio. Not only does the iPhone account for more than half of Apple’s revenue, the iPad contributes now more than the iMac which is not doing too poorly either. And yet Apple has another trump card in their pocket which they will pull when the time is ripe - the Apple TV.

It hasn’t been widely reported, but the Apple TV is powered by iOS - the same operating system that is used in the iPhone and iPad. That suggests that many of the hundreds of thousand of apps available in the App Store today could run on Apple TV too. Not all of them will work, of course, as the user interface, resolution, and other capabilities of the device are different. But popular apps such as weather, news, RSS reader, maps, charts, calendars, and even a browser are apps that would be useful today on a TV screen.

Apple TV actually already provides a small number of apps including Netflix, YouTube, Flickr, a photo viewer and a music and video player. Presumably not much is needed to open the device to developers and I suspect that the existing development tools and skills are highly applicable. It is also likely that Apple will add a mouse or the touch pad to Apple TV which would open the door for many more interactive apps.

This will be a massive source of additional revenue for Apple and also a huge competitive advantage. Developers are already realizing that building apps for iOS gets them way more bang for their investment buck than building for the other mobile operating systems. A single iOS app runs on all devices including iPhone, iTouch, and iPad. In contrast, many developers are today complaining about the fragmentation of the Android market where an app built for Samsung Galaxy may or may not work on the HTC EVO. That’s why most developers still start with iOS support before moving on to Android - at least that’s what Flurry, Inc. recently reported. 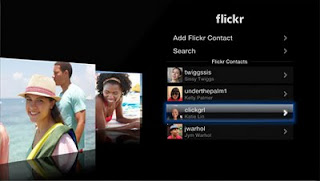 Apple is not the only vendor pursuing this idea - all the game consoles have the same ambition. My Nintendo Wii supports a couple of apps including Netflix. Microsoft demonstrated their Xbox 360 with Lync-based video conferencing at the recent Worldwide Partner Conference (WPC). Intelligent devices connected to a TV set are going to be the next app frontier. And Apple has an incredible advantage as their TV device runs on a well tested operating system with thousands of existing apps.
Posted by Lubor Ptacek at 2:08 PM