Mobile Device as a Primary Interface?

So, you don't believe that mobile devices are becoming e primary user interface? Well, here is an interesting data point: 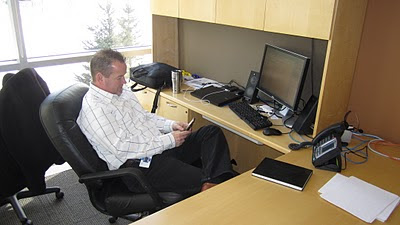 This is Alain, my co-worker, who's office is next door to mine. And since I got a tiny little Canon for Christmas that I can carry on me at all times, I've snapped this picture of him. It's an increasingly common scene. He's working on his BlackBerry while sitting at his desk. There is a laptop in front of him but he's using it only for specific tasks. Most of his routine work is done on the mobile device.
Now, add an iPad or a Galaxy into the mix and the number of tasks performed on a mobile device increases significantly. What's amazing is that the picture has not been taken on the road but in the office. On the road, we have often no choice but in the office, we do. Yet Alain works on a BlackBerry and I am typing this blog post on an iPad.
That's a pretty good indication of the things to come, isn't it?
Posted by Lubor Ptacek at 8:38 PM